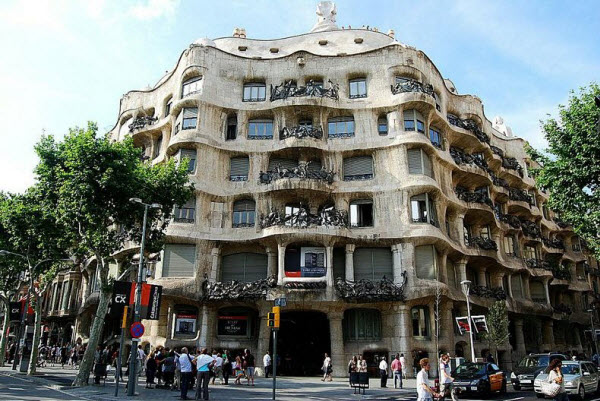 Casa Milà, widely known as ‘La Pedrera’, is an artistic piece of modern architecture. Its an unusual building of undulating stone facade and wrought iron balconies and windows. It was built during 1906 and 1912 by the architect Antoni Gaudi (1852–1926). The speciality of this building is that it has been designed without weight bearing walls and instead used steel, arches and pillars in irregular shapes to form the circular design. The local government objected to some aspects of the project, and fined the owners for many infractions of building codes. Today it is the headquarters of Fundació Catalunya-La Pedrera and houses a cultural centre and activities and exhibitions. It was declared World Heritage by UNESCO.
La Pedrera is one of the best-known works of Antoni Gaudí, and is one of the symbols of Barcelona. Its limestone facade with the cave-like balconies appears to be cut off one single white rock. This is why it was given the name La Pedrera (the quarry) during construction and even today is more widely known by this nickname.
The building consists of a succession of stone walls on the outside, while the interior has two painted courtyards, columns and a range of rooms. There are large windows and iron balconies set into the undulating facade. On the roof, there are marvellous chimneys that resemble surrealistic creatures – these sculptures are works of art in themselves. Being one of the tallest buildings on Paseo de Gràcia , the rooftops provide a splendid view of the district and Barcelona’s city center.
A top floor apartment decorated with early 20th century furnishings is also available for viewing giving visitors a real sense of the circular shapes of the rooms. All of the apartments overlook two courtyards designed by Gaudi to allow sunlight into the living spaces. The attic features an exhibit of Gaudi’s many creations complete with scale models.