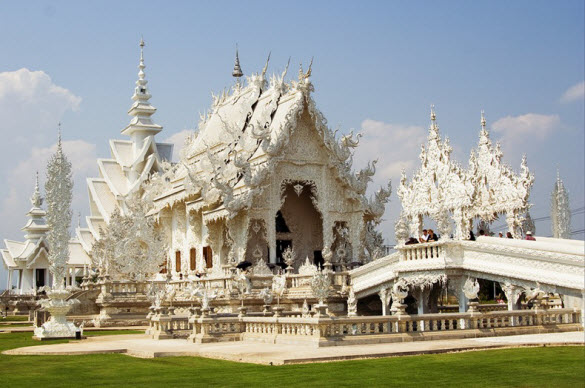 Wat Rong Khun, popularly known as the White Temple, is an amazing and unconventional Buddhist temple in Chiang Rai, Thailand. This attractive temple is designed by Thai painter-turned-architect Chalermchai Kositpipat, in 1997 and this magnificent temple is a bizarre blend of traditional Thai architecture and the surreal. The main building is painted white to symbolise Buddha’s purity, and is covered in mosaics of mirrors, sparkling in the sun. All around the complex are . Intricate sculptures of demons, skulls, severed heads hanging from trees and other bizarre objects have been placed all around the temple.
One has to cross over a bridge built along a moat filled with innumerable sculptures of outreaching arms symbolizing desire to reach the temple. You will be greeted y traditional Buddha life scenarios by contemporary scenes and icons of popular culture when you enter the temple. Murals of Batman, Superman, Predator and even Keanu Reeves as Neo from The Matrix are seen in the interior. There are paintings of spaceships and a scene depicting a cataclysmic event annihilating planet earth. Take a look at the pictures of Wat Rong Khun, Buddist temple in Chiang Rai, Thailand